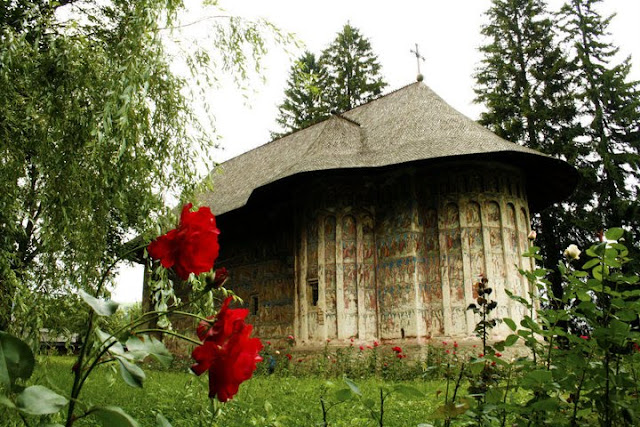 Situated in a beautiful setting, 5 km north of the town of Gura Humorului, Humor church was built in 1530 by High Chancellor Teodor Bubuiog at the behest of Voivode Petru Rares, on the site of a previous monastery built before 1415. The monastery was closed in 1786 and was not re-established until 1991. It is now a small convent, served by nuns - the villagers use another church, on a nearby hillock. The church, devoted to the Holy Virgin, is smaller than other churches of the painted monasteries and does not have any cupolas. Otherwise, it preserves the same traditional three-cusped plan proper to most other painted monasteries. Humor is protected by a wooden stockade rather than a stone rampart, and lacks the characteristic spire - indicating that it was founded by a boyar, not the ruler. The belfry with a belvedere was erected in 1641, under Vasile Lupu's rule.
The small church, with a wide open porch arched on three sides, has a vault which is similar to the one at Moldovita except that the one at Humor seems to be floating, a sample of Byzantine art highly appreciated by architect experts. The open porch is separated from the nave by three columns connected through broken arches which have crossed vaults. The windows frames are Gothic. The open porch with arcades was the first of its kind to be built in Bucovina, an innovation influenced by both the local building tradition (veranda, terrace) and the foreign Renaissance (the lodge found later in the - Brancovan style- ). Another innovation is the - tainitza- (a hidden place) above the burial-vault, precious objects were kept there, especially in difficult times.
Humor was one of the first of Bucovina's painted monasteries to be frescoed and, along with Voronet is probably the best preserved. The master painter responsible for Humor's frescoes, which were painted in 1535, is Toma of Suceava, the most famous church painter of the time. If at Voronet blue is predominant, Humor is mainly painted in reddish brown (from oriental madder pigment), completed nevertheless by rich blues and greens. The Last Judgment, placed on the wall beneath the unusual open porch, is similar to the Voronet one, but, unfortunately, the Tree of Jesse has been effaced by erosion. The significant difference is that the Devil is portrayed as the Scarlet Woman, though this patch is now so faint, that it has become nearly invisible. Such misogyny had its counterpart in the peasant conception of Hell, assumed to be a cavern upheld by seven old women who had surpassed Satan in wickedness during their lifetimes. Since the women are mortal, the legend goes, the Devil (Dracul) must constantly search the world for replacements - and he never fails to find them.
Another famous exterior painting, Hymn to the Virgin, has been inspired by the poem written by Patriarch Serghei of Constantinople, and dedicated to the Virgin Mary, who is reputed to have saved the city during the attack of the Persians in 626. The Persians are, however, depicted as Turks which is a common device in these monasteries, their paintings being used in part for political propaganda in addition to their spiritual meaning. The Siege of Constantinople, displayed on a large surface, in a central position, also suggests Moldavians’ wish to defeat their enemies, the Turks. In the narthex, a mural painting displays Petru Rares and his family; the prince is also buried within the church together with his wife, Anastasia. The princely throne in the church bears Moldavia's coat of arms.
The tombstone of Teodor Bubuiog is situated under his portrait and that of his wife’s. Petru Rares and his wife are both buried in the monastery church as well. Humor Monastery held for many years the valuable 'Humor Evangelistry', a book dating back to 1473, painted by monk Nicodim and displaying a famous portrait of Stephen the Great. The monastery houses a valuable collection of icons dating back to the 16th century. The monastery, underwent several restoration works, in 1868, 1888, 1960-1961, 1967-1970, and 1971-1972, when the paintings were washed. 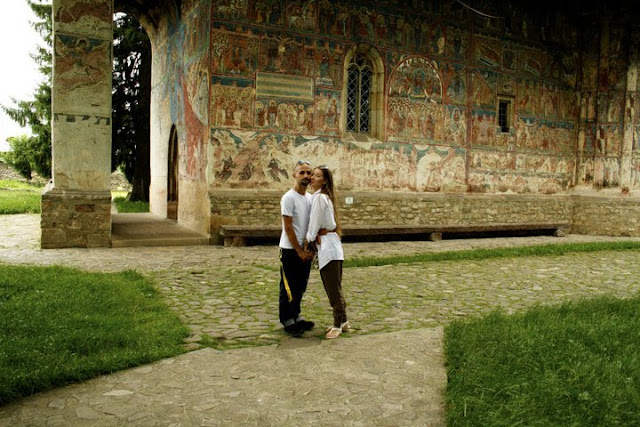 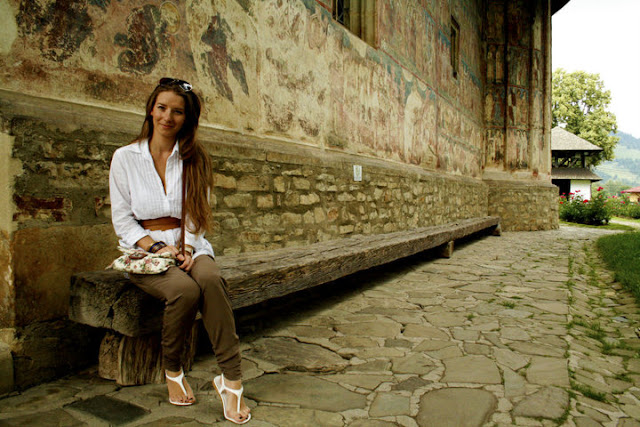