having a tea cup & learning about Thessaloniki 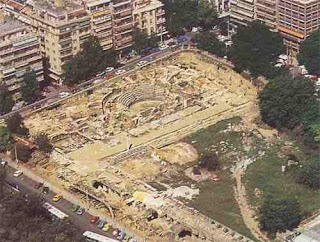 ... this is actually my second cup of tea that I'm drinking in the last half an hour...I started my day spoiling the man I love, who has been up since 7 a.m...he had no sleep... so until 11 a.m. he "entertained" himself with some computer games. Now, he's sleeping :)) and I am craving for some hot fruit tea.
As usual , when I open up my laptop, I start checking my mail and stuff. On my blog I saw that someone from Thessaloniki visited many times "Cinnamon Spiced Art", I couldn't be happier! That means he/she liked it ! I recognized the greek flag, but I didn't new many things about this city. So, I've decided to enrich my knowledge about Greece - knowing the fact that I would really want to visit this country the coming summer:) - So this are some beautiful things about: 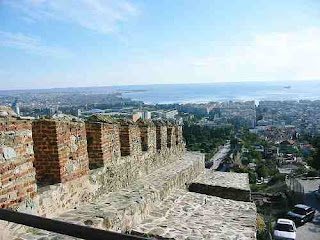 Thessaloniki, the second largest city of Greece and the capital of Macedonia, is the jewel of the north. Famous for its lively streets, vibrant night life and cultural signature, it is the perfect destination for any visitor. For eons Thessaloniki has been the home of Turkish, Serbian and Jewish origin; which have left their mark on the cultural identity of the city. The beaches of Halkidiki or the most beautiful spots in the region of Macedonia It will be a good point to start and of course the ruins in Vergina which include the tomb of Philip (Alexander’s father The Great). Also the visitors will find Roman and Byzantine sites. Rebuilt in 1920s, today Thessaloniki is a lively modern city bustling with life and movement. The city with parks, squares, large avenues, old houses and neoclassical buildings, stands side by side with modern dwellings which taking a walk through any place of the city will be an interesting journey. The past and present are merge too, the old taverns, “ouzeries”, restaurants next to the hotels and luxury bars, “bouzouki halls” all of this places form an interesting journey for people who arrives to the city and non doubts the nightlife of the city are exceptional with bars and clubs playing great music. Platia Elefterias and Platia Aristotelous both on the waterfront are the main squares with children playing or people just strolling. Lefkos Pyrgos or The White Tower, the symbol of the city, is a museum of art and history, it was a prison for insubordinate Janisaries, who were soldiers of the sultan who had been taken from their Christian parents when they were children and molded into his elite storm troopers. Thessaloniki International Trade Fair is held every year in September exhibit Greek and foreign products and when it is over the Greek Song Festival takes place as well as the very popular Thessaloniki Film festival.
by Gabri est là la 12:02 PM