Vienna - the gate to Eastern Europe.

I couldn't wait to see Vienna again. I've been here for the first time when I was in the second year of highschool, that was the moment I fell in love with Austria and started to forget (for good) my birth country. 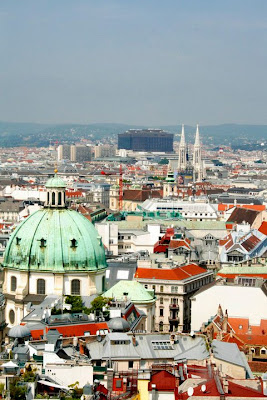 Vienna seen from one of the towers of the St. Stephen's Cathedral. 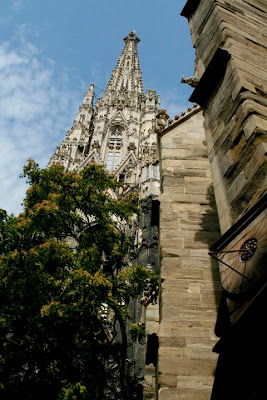 Yet another patchwork of architectural styles, but predominantly Gothic. None of the original construction remains—the oldest extant sections are the thirteenth century Giant Gate (Riesentor) and Towers of the Heathens (Heidentürme), both of which are Romanesque. The 448 ft South Tower (Südturm), often known by its Viennese diminutive Steffl (also a nickname for the entire cathedral), was finished in 1433. This is where the Pummerin, a huge bell cast from melted-down Turkish cannons, hangs. Steffl's intended twin, the North Tower (Nordturm), was never finished. In 1511, building in Gothic style ceased due to being out of fashion. Over fifty years later, in 1579, a Renaissance spire was added to the Nordturm to make it look less like the builders had stormed off the job. The main altar has a Baroque panel showing St. Stephen, Christianity’s first martyr. The organized tour is worth it, since some of the finest works of art in the cathedral can only be seen with a guide, such as Emperor Frederick III's red marble sepulchre and the immense Gothic carved Altar of Wiener Neustadt. The aborted North Tower has an observation deck with an amazing view of downtown Vienna. Nearby is the entrance to the catacombs, where legions of bishops and Habsburg body parts are buried (the intestines, specifically). 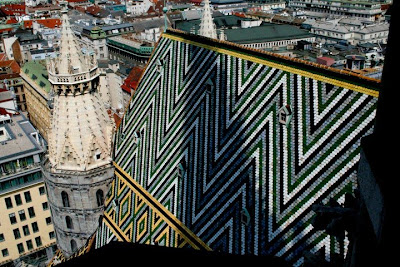 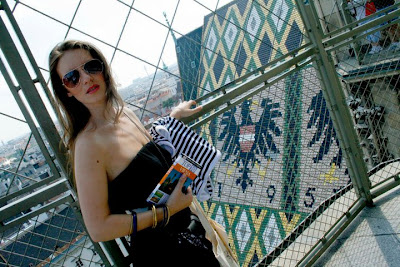 up - roof detail of the cathedral
down- Stephansplatz 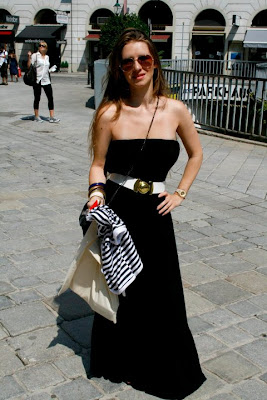 The Stephansplatz is a square at the geographical centre of Vienna. It is named after its most prominent building, the Stephansdom, Vienna's cathedral and one of the tallest chriches in the world. Before the 20th century, a row of houses separated Stephansplatz from Stock-im-Eisen-Platz,but since their destruction, the name Stephansplatz started to be used for the wider area covering both. To the west and south, respectively, run the exclusive shopping streets Graben (literally "ditch") and Kärnten -is the german for Carinthia-. Opposite the Stephansdom is the Haas-Haus, a piece of striking modern architecture by Hans Hollein. Although public opinion was originally skeptical about the combination of the mediæval cathedral and the glass and steel building, it is now considered an example of how old and new architecture can mix harmoniously. 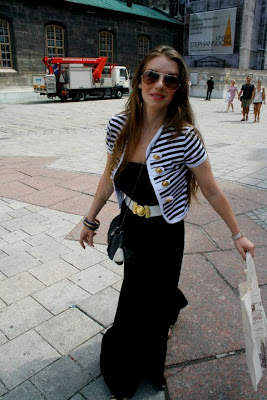