Beneath Istanbul lie hundreds of gloomy Byzantine cisterns. They're left from the days when Istanbul was Constantinople. The grandest of all is the Basilica Cistern (Yerebatan Sarnıç), so called because it lies beneath the Stoa Basilica, a grand Byzantine public square. It's also called the Sunken Palace Cistern (Yerebatan Saray Sarnıçı) because that's what it looks like. 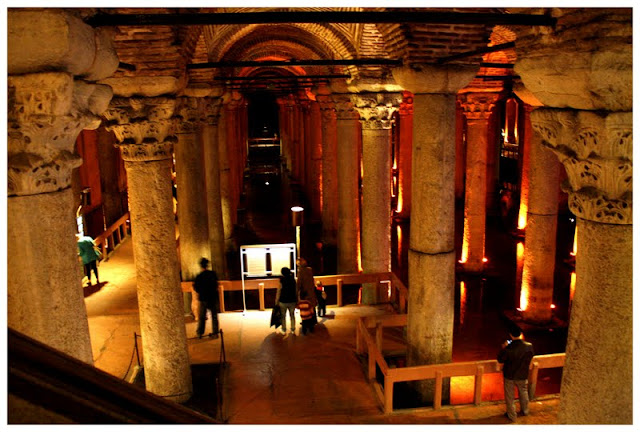 ▼Art exhibit in the Cistern 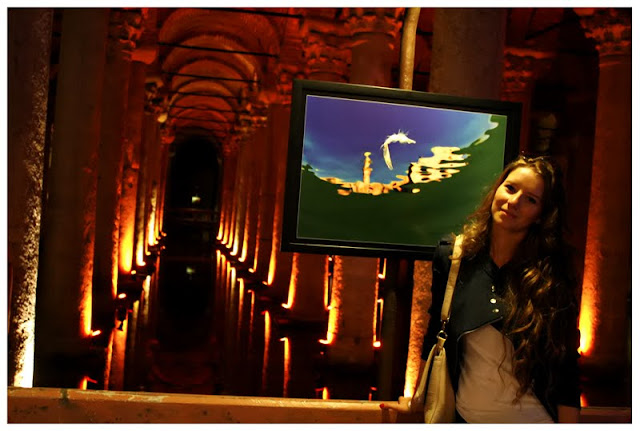 It's impressive because of its size, measuring 138 meters long and 64.6 meters wide, covering nearly 1000 square meters (2.4 acres); its capacity (80,000 cubic meters—over 21 million US gallons) and its 336 marble columns. Remember the scene in the old James Bond movie From Russia With Love when Bond is rowing in a small boat through a forest of marble columns? That scene was filmed in Yerebatan. :) 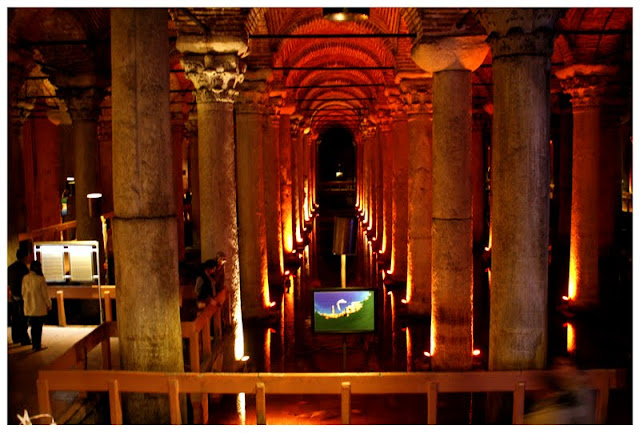 Built by Justinian after 532, the Basilica Cistern stored water for the Great Palace and nearby buildings. Lost to memory, it was rediscovered by Petrus Gyllius, who came to Constantinople in search of Byzantine monuments. Gyllius, who noticed that local people got their water by lowering buckets through holes in the floors of their houses, found an entrance and thus put it back on the map. The Ottomans used it to supply The Topkapı Palace. 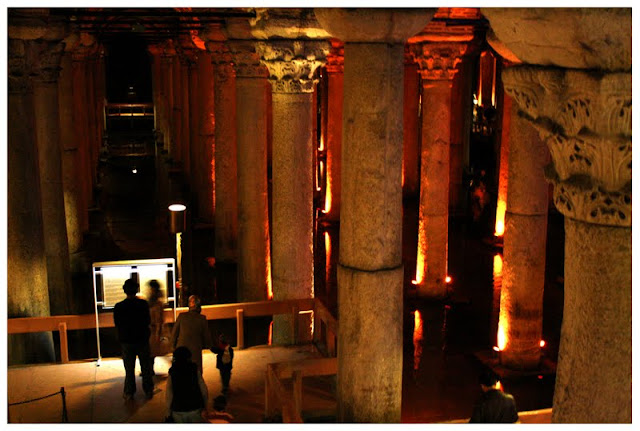 The waters of the cistern were filled with carp. :) 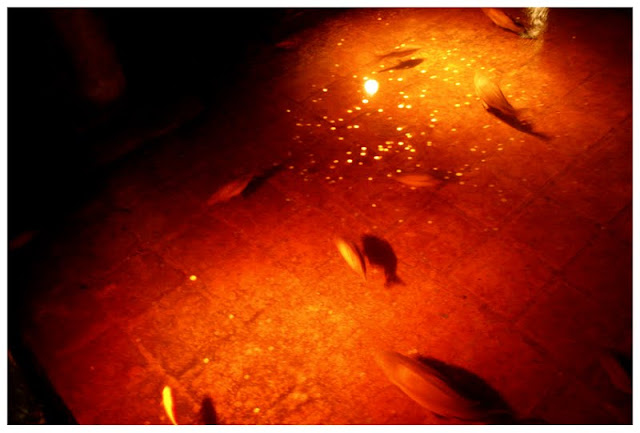 ▼ Medusa Column bases
Located in the northwest corner of the cistern, the bases of two columns reuse blocks carved with the visage of Medusa. The origin of the two heads is unknown, though it is thought that the heads were brought to the cistern after being removed from a building of the late Roman period. There is no written evidence that suggests they were used as column pedestals previously. Tradition has it that the blocks are oriented sideways and inverted in order to negate the power of the Gorgons' gaze, however it is widely thought that they were placed sideways and upside down only to be the proper size to support their columns. 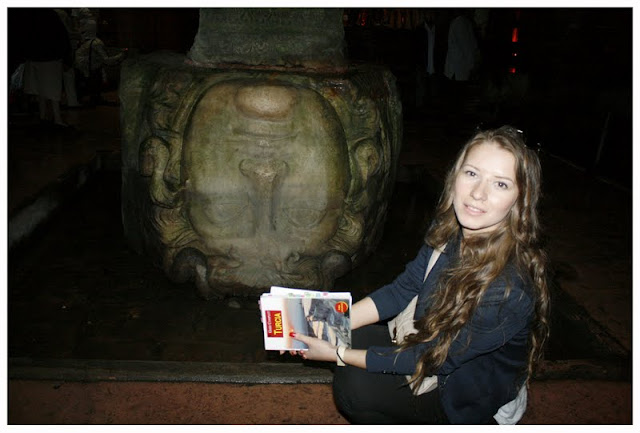 According to popular myth, Medusa was one of the three Gorgons, the terrifying female creatures from Greek Mythology. Legend has it that Medusa, with her hair of snakes, could turn anyone who looked at her into stone, and therefore images of Gorgons were used to protect great buildings. Another version of the story claims that Medusa was the only mortal Gorgon, a beautiful girl with long hair and dark eyes who had long been in love with Perseus, the son of Zeus. Athene, also in love with Perseus, turned Medusa's hair into snakes in a jealous rage. From then on, every person Medusa looked at was petrified. After learning of Medusa's curse, Perseus beheaded her, taking her head to war with him and turning his enemies into stone. It is said that many Byzantium era sword handles and columns were engraved with her head upside down. 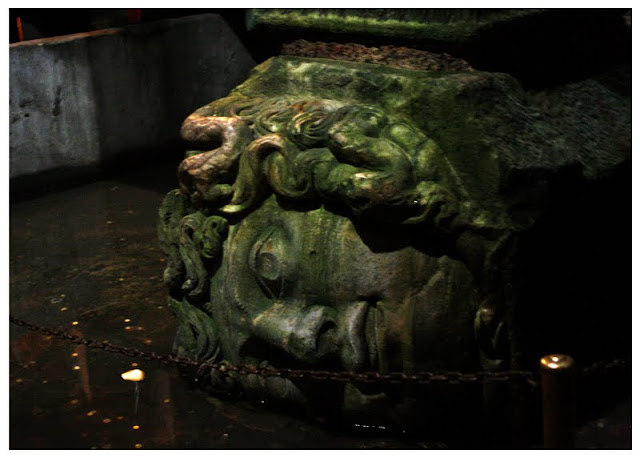 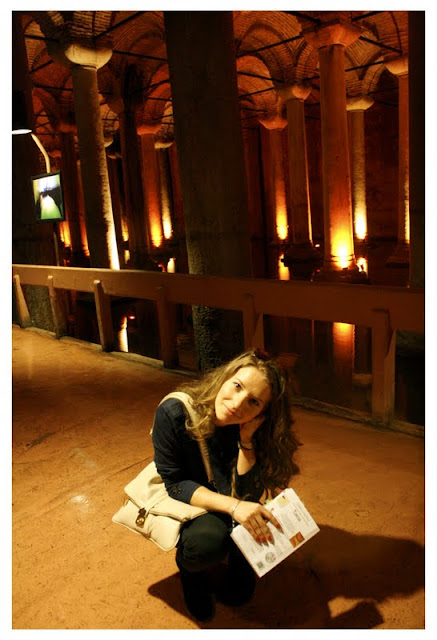 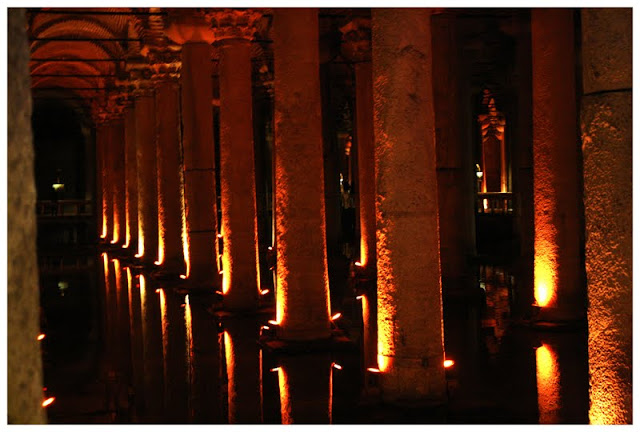 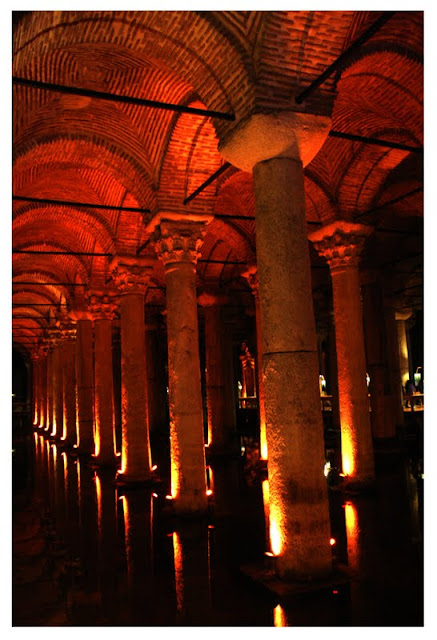 Ceramics as souvenirs at the Basilica Cistern. 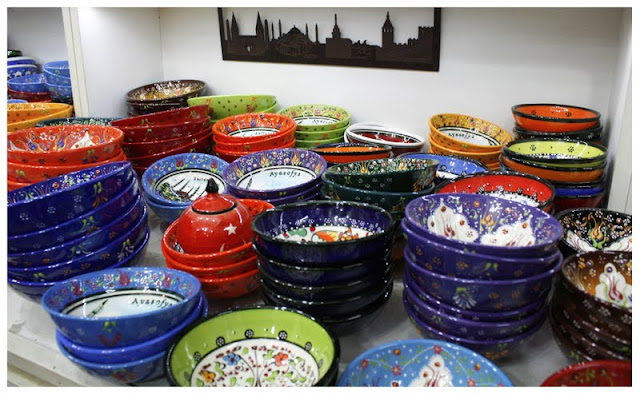 The Basilica Cistern  was the last thing we were able to visit in Istanbul. It was worth every lira of it. It's a must see definitely and you'll not be sorry. I don't know if you can really see roman columns underneath a city.... Breathtaking!
See ya soon, Love, Gab~
by Gabri est là la 11:59 PM