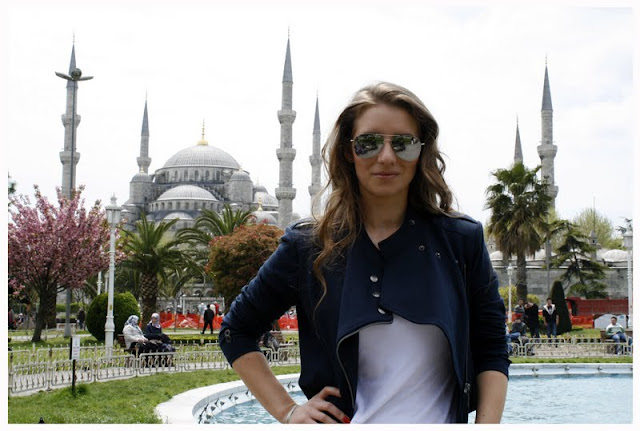 It's truly so hard to describe in words The Blue Mosque from Istanbul. It was my first contact with the Muslim world, architecture, religion...When I first saw the way this mosque looked like on the web...I couldn't believe I was going to actually see it ... it seemed so imposing, so overwhelming, so nothing like I've ever seen before.  To step in it and around and being able to admire it in all it's glory, was a unique experience. I don't know if pictures will do the mosque any credit (probably it won't), but at least I can share my joy with you! You'll find some info about it too below! :) 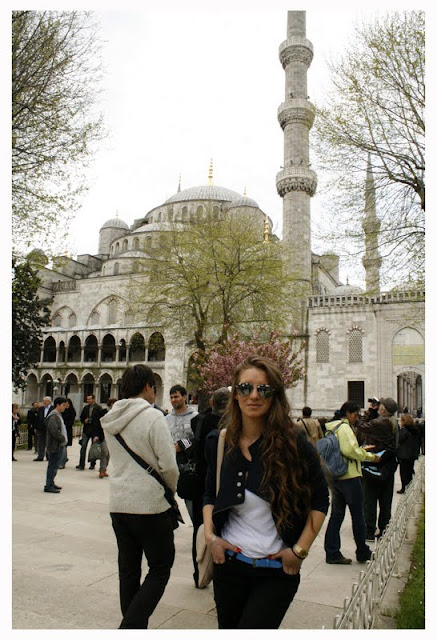 detail -> The Blue Mosque ( Sultanahmet Mosque), IstanbulThe mosque (built 1603-17) is the masterwork of Ottoman architect Sedefkâr Mehmet Ağa. It's built on the site of the Great Palace of Byzantium, on the southeastern side of the Hippodrome.The cascading domes and six slender minarets of the Sultanahmet Mosque (better known as the "Blue Mosque") dominate the skyline of Istanbul. In the 17th century, Sultan Ahmet I wished to build an Islamic place of worship that would be even better than the Hagia Sophia, and the mosque named for him is the result. The two great architectural achievements now stand next to each other in Istanbul's main square, and it is up to visitors to decide which is more impressive. 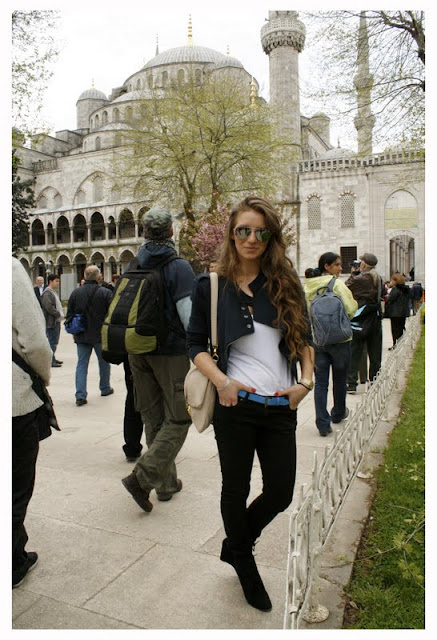 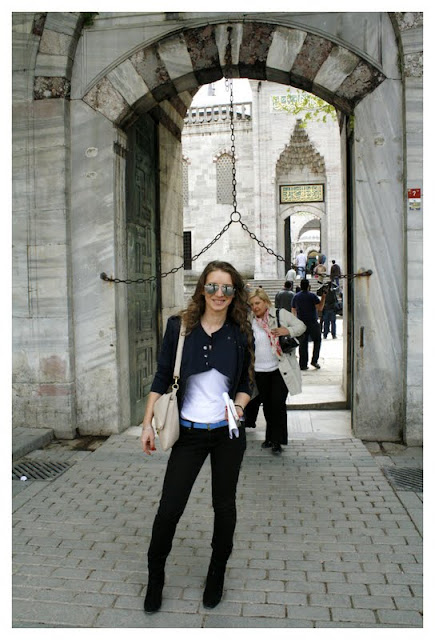 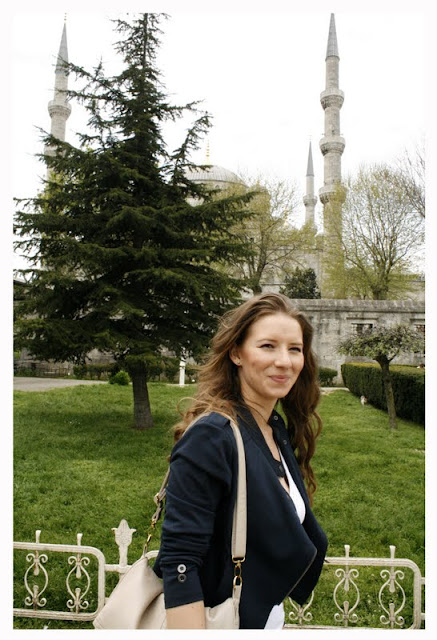 No shoes in the mosque... :) It was a relief for my feet anyway! 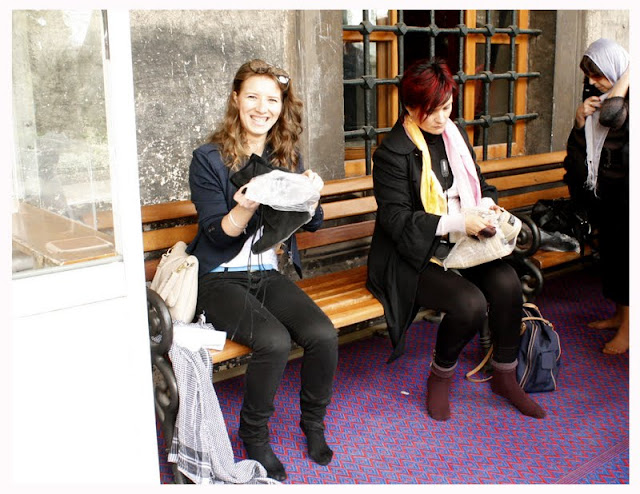 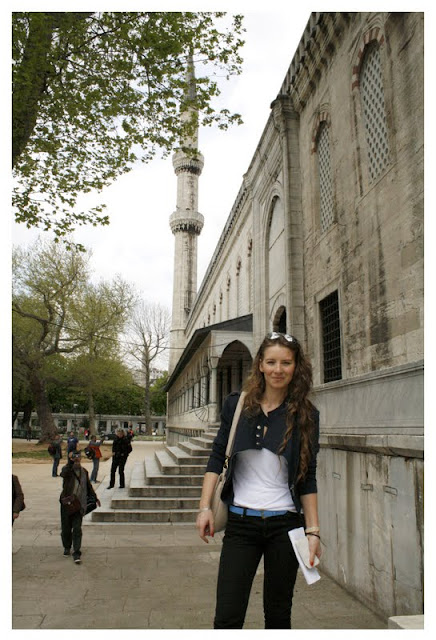 On the sides of the mosque, people who want to enter in can wash their feet...well,... at least Muslim people have to do it. It is said that this process purifies the body and soul. 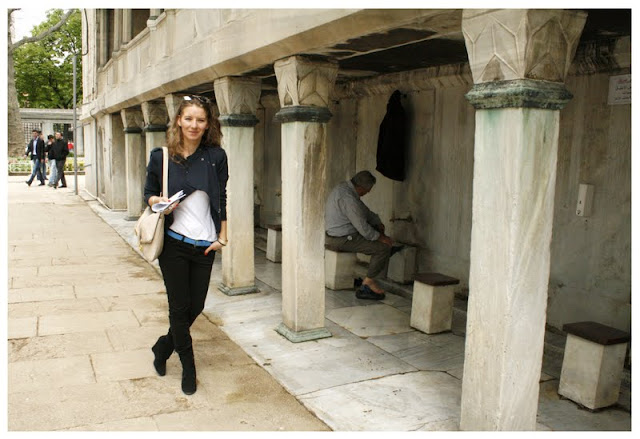 The design of the Sultan Ahmed Mosque is the culmination of two centuries of both Ottoman mosque and Byzantine church development. It incorporates some Byzantine elements of the neighboring Hagia Sophia with traditional Islamic architecture and is considered to be the last great mosque of the classical period. 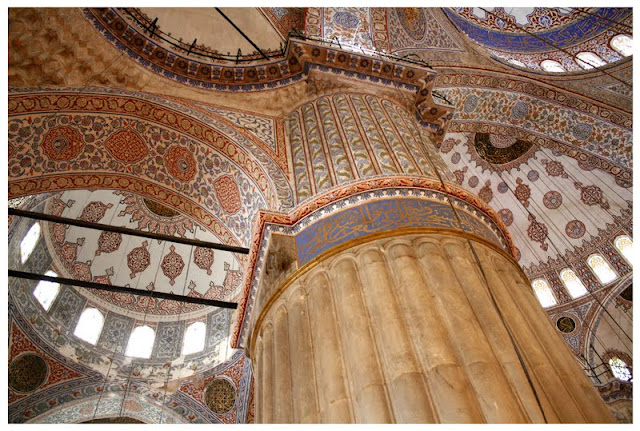 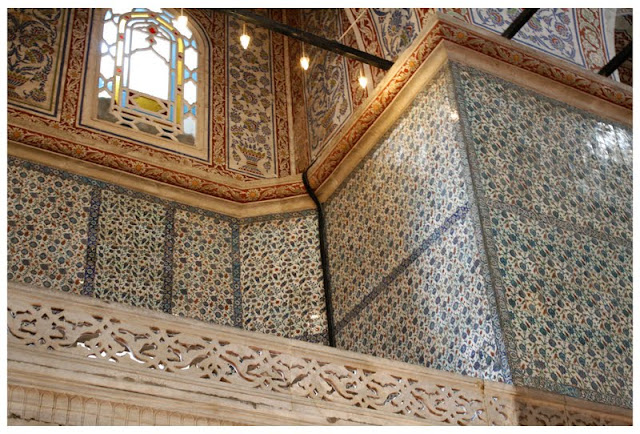 Istanbul's imperial Mosque of Sultan Ahmet I (Sultan Ahmet Camii) is called the Blue Mosque because of its interior tiles, mostly on the upper level and difficult to see unless you're right up there with them. 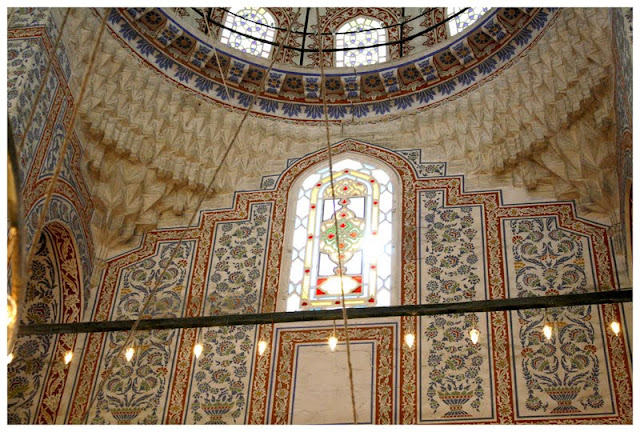 At its lower levels and at every pier, the interior of the mosque is lined with more than 20,000 handmade ceramic tiles, made at Iznik (the ancient Nicaea) in more than fifty different tulip designs. The tiles at lower levels are traditional in design, while at gallery level their design becomes flamboyant with representations of flowers, fruit and cypresses. More than 20,000 tiles were made under the supervision of the Iznik master potter Kasap Haci,and Baris Efendi from Avanos(Cappadocia). 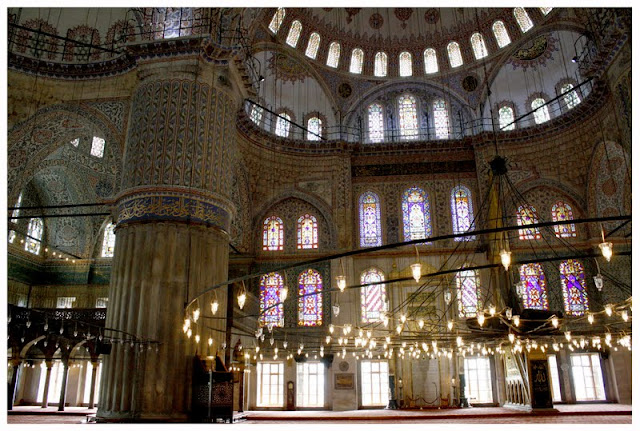 details-The Blue Mosque ( Sultanahmet Mosque), Istanbul - The upper levels of the interior are dominated by blue paint. More than 200 stained glass windows with intricate designs admit natural light, today assisted by chandeliers. On the chandeliers, ostrich eggs are found that were meant to avoid cobwebs inside the mosque by repelling spiders. The decorations include verses from the Qur'an, many of them made by Seyyid Kasim Gubari, regarded as the greatest calligrapher of his time. 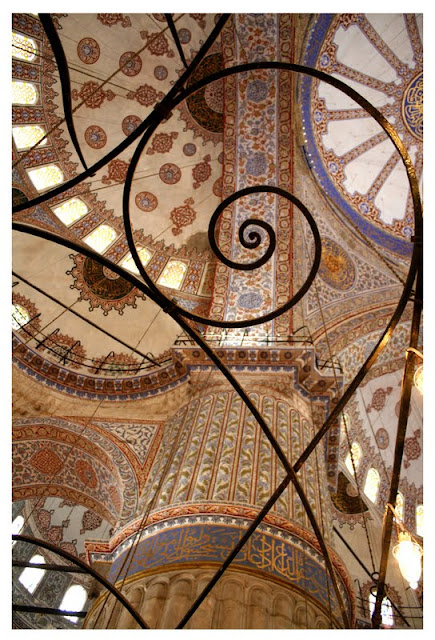 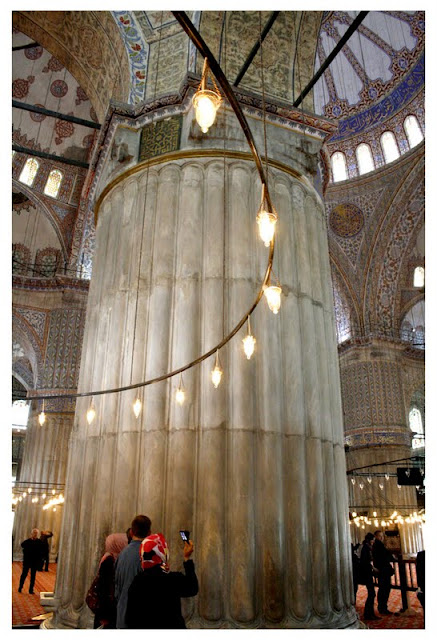 Just look at the thickness of that minaret!! Incredible! 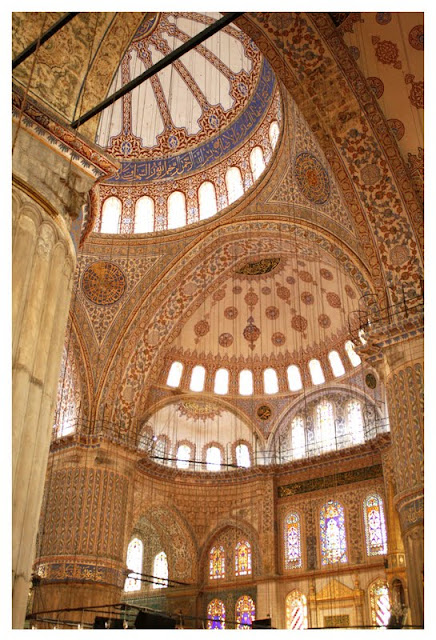 The floors are covered with carpets, which are donated by faithful people and are regularly replaced as they wear out. The many spacious windows confer a spacious impression. 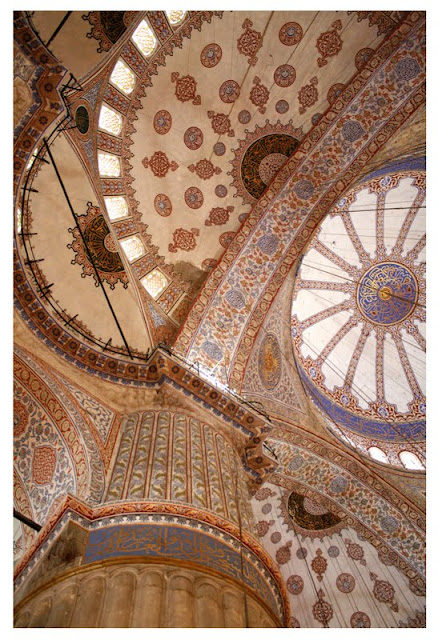 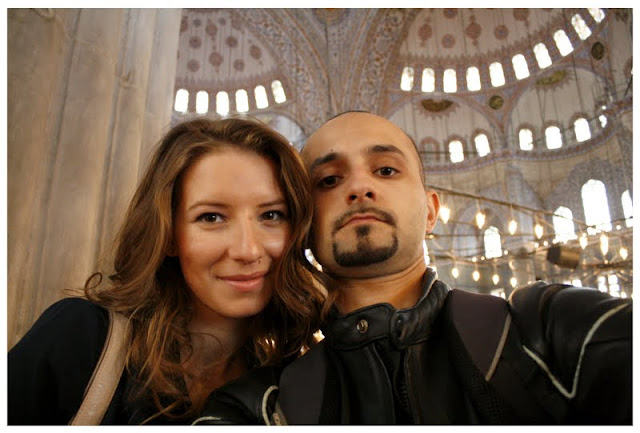 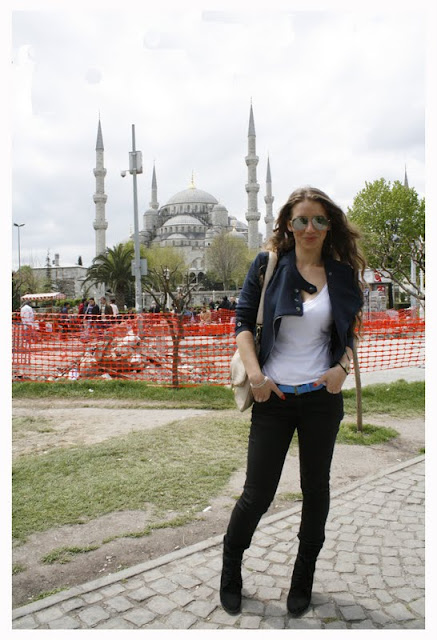 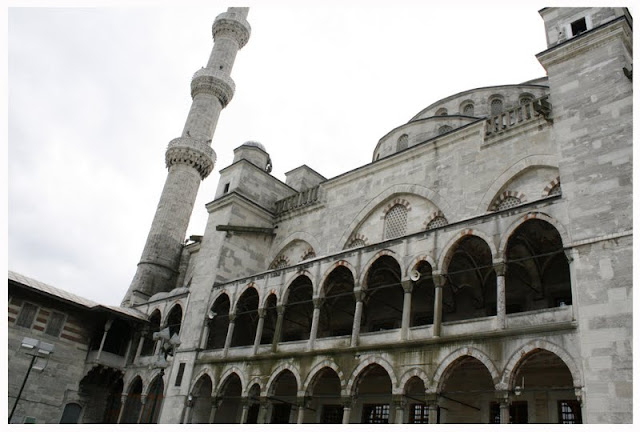 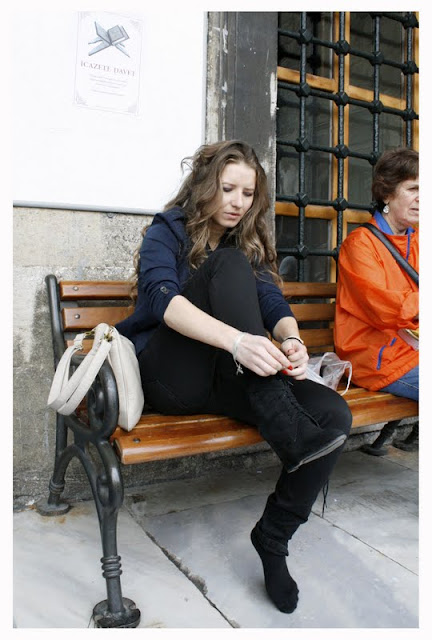 Time to put the shoes back on and keep on moving on! :) 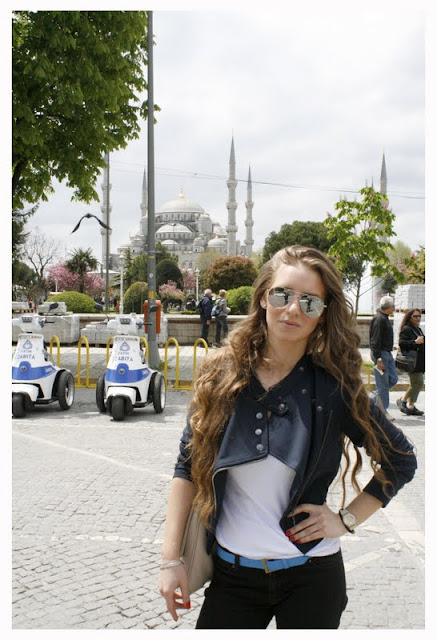 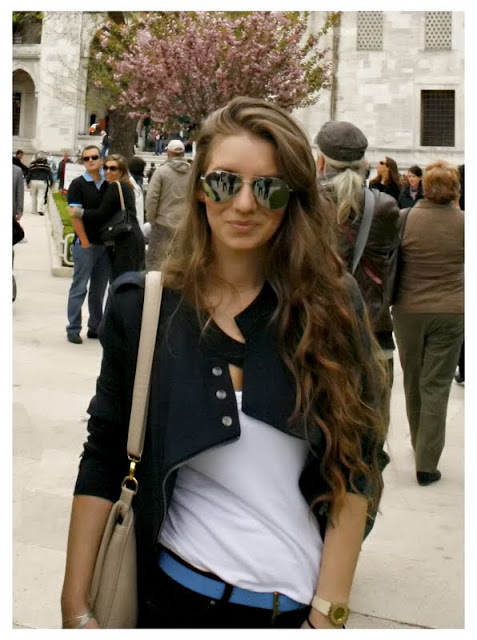 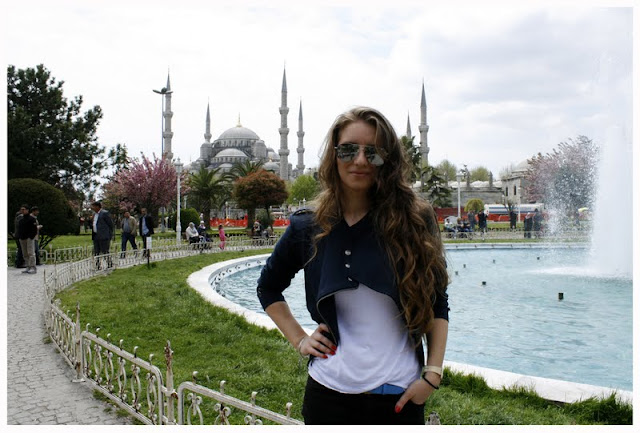